granite gods began as a single poem, Lucifer, which Alan began to write about his ex after he was rather unceremoniously dumped on November 11th, 2007 – a copy of his apartment key dropped in his hand and the statement, ending a rather intense argument, “Here’s something you don’t know.”  Cruel as hell but  rather fitting to end a relationship with a know-it-all drama queen poet.  How utterly poetic.  How brilliantly final.  Granite gods was a term he had coined to describe the dark black beauties that he liked to coddle, cuddle and collect.  Lucifer, the ex, was hardly one of those but the term seemed a fitting title for a series of poems about a humanoid narrator and his modern day dalliances with fallen angelic beings.  It was after a performance of black cats, cocks and other idols, featuring some of the poems, in Oxford in the UK, during a conversation with an appreciative audience member, that he realized that the series was really about the way that we deify and demonize lovers.  The images are collages featuring, exploring and/or illustrating the text. 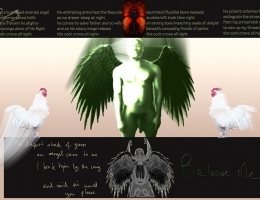 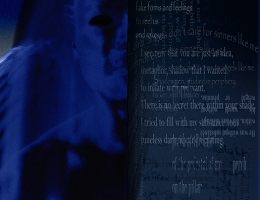 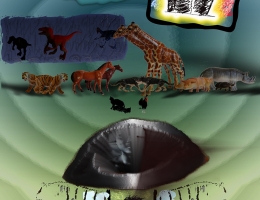